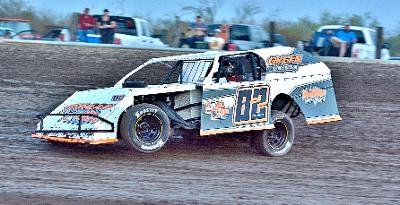 After a scheduled week off, it was time for round 2 of the I-37 Speedway points season on the ¼ mile, semi-banked, dirt oval just outside Pleasanton. Along with the regular classes, IMCA Modifieds, Limited Modified, Factory Stocks, Sport Compacts and Go-Karts, the Eco-Mods returned for another visit. Late Models are scheduled off this weekend.

As a bonus for the kids, the Easter Bunny will be giving rides in the track school bus.

In the “who’s hot” file it would have to be Weslaco’s Jared Maupin. In two races this year, in two different classes, Maupin’s worst finish is second. That’s two wins in the Skip and Cheryl Gray owned, IMCA Modified plus a first and second in the Jamie Fuller owned, Factory Stock. A 75% winning percentage with a 1.333 average finish, if my math doesn’t fail me.

Would the streak continue?

Green to Checkers for Green

As green waved on the 20-lap IMCA Modified main it was Rick Green with a big run into turn 1 first trailed by Robert Liese, Jared Maupin, Ryan Doyon and Marlin Samford. Greg Dinsmore got past Samford quickly for fifth before caution flew as Liese, Doyon, Samford and Gilbert Amezquita had trouble in turn 4.

Shortly after green was back on, yellow flew again when Liese and DJ Schoat got together, again in turn 4. Maupin gave Green a look on the high side on the restart while Jamie Campbell and Doyon battled for fourth. Two more solo spins slowed the pace coming to halfway showing Green, Maupin, Dinsmore, Doyon and Campbell in the top five.

The last half was run under green with Maupin looking middle-up on Green in turns 1-2 and then the bottom in turns 3-4. Dinsmore closed in on Maupin looking low as Maupin tried high. This gave Doyon the chance to reel Dinsmore in for the closing laps.

Up front it was the former track champion, Green(Liberty Hill) inching ahead by a couple car lengths to score the victory in his Green Construction, Chris Carroll Construction, Natemare Graphics, JDR Carburetors, crate powered, GRT by Carroll Chassis.

“They let me take the green flag tonight,” joked Green. “I actually drove it in a little too hard and saw him(Jared Maupin) get beside me. The car finally bit and once I could hit my lines I was alright. On that track tonight I wasn’t worried about someone going around the top. I knew I was messing up in a couple places, but never heard anyone. I did that on a restart, and never did it again.”

“If I got the car set, and only went about ¾ throttle into turns 1-2 I could mat it coming off. Turns 3-4 I was barely lifting and the car was rotating pretty decent. All those cautions/restart at the beginning made it tough to get in a rhythm. I felt like I was getting away from about every time, except that one.”

The 20-lap Limited Modified feature saw Marcus Mikulencak quickly fire off into turn 1 chased by GW Hessong, Brian Harbison, Allen Alexander and Derrick Gonzalez. Alexander slapped the front stretch wall, and kept on trucking, but Hessong would go up in smoke and stop for a lap 2 caution.

Caution for debris off Alexanders car slowed the pace on lap 11 sending him to the tail. As Mikulencak got away under green, Tausch got past Harbison for second. Alexanders woes continued as he clipped an infield tire half spinning to the infield, and pitting. Mikulencak(Corpus Christi) built a full straight lead and cruised to the checkers in the Premier Minerals, Ace Transmission, Vinco Plumbing, RPM Construction, On Demand Shirts, Mattress Firm, All in Designs, Swenson Racing Shocks, GT Sirozzoti, L87 Speedway, IRP Chassis.

Gilbert Perez beat the field off turn 2 for the early lead of the 20-lap Eco-Mod feature. Nathan Titzman, Brianna Witzsche, Brad Waddups and Cooper Koliba fell in line behind. B. Witzsche, Waddups and Koliba tried three wide, but Waddups would loop it and continue with Rowdy Flanagan taking fourth from Koliba.

Flanagan then picked off third from B. Witzsche leaving her side by side with Koliba for fourth. At the crossed flags it was Perez, Titzman, Flanagan, Koliba and Daniel Preston in the top five when Cervantes looped it in turn 2 for a caution. Back to green, Preston grabbed fourth from Koliba with Dustin Witzsche following along to fifth.

A double spin by Cervantes and B. Witzsche set up a restart that saw a three wide battle for second giving Perez the chance to pull away. The three abreast racing continued between Preston, Waddups, and D. Witzsche. As the white waved, Perez(Corpus Christi) had a five-car margin taking his first I-37 Speedway win in the Annas House, Armour All Auto Detailing, RNM Install, Ace Transmission, CD Electric, Mission Race Engines, homebuilt chassis.

“You know what they say, lucky number three,” replied Perez. “This is our third time up here. Third times a charm. We can now retire the E-mod knowing we got a win at all three tracks. I’ve won a couple track championships in this car at South Texas Race Ranch, we’ll see if we can get another one this year.

“I always wonder if there’s a better line. The 87 of Nathan Titzman and 6” of Daniel Preston are some really fast cars. I knew if I made any mistake that they’d be right there. Throughout the whole race it felt pretty good. The only problem I had was about 5 laps to go my window net fell down and I had to keep it away from my hands. Other that it was a great race.

“We’ve got a Sportmod and I’d like to focus on getting that going, but we’ve got the E-Mod points lead and wanting to go for another championship too.

The 20-lap Factory Stock features are always filled with thrills and close, hard racing. Tonight would be no exception. Jared Maupin was first to turn 1 from the outside front row, but polesitter Allen Torres got a good run on the back stretch. Behind them Nathan Rachui, Dillon Gaither and Paul Reyes were filling out the top five.

Torres and Maupin were still side by for the lead until lap 3 when casual contact was made cutting down the right front on Maupin’s ride. On the restart Dustin Hurley pounded the front straight wall and got rear ended by Justin Henley. The ensuing restart saw Torres jump ahead while Gaither and Rachui stayed side by side, with Kasey Krauss and Reyes door to door for fourth.

Torres made a mistake, slipping high allowing in turn 4. Gaither twas able to snag the point, as Torres fell back to seventh. Torres, now on a mission, went three wide with Krauss and Brian Harbison to move back up to fourth. By halfway Gaither was still out front while Torres worked back to second, Rachui, Reyes and Harbison completed the top five.

Torres wasted little time putting the heat on Gaither to get the lead back. Torres would try to dive in low in turn 1, but Gaither had the run off turn 2 to keep him at bay. Torres best look came on lap 17 when he and Gaither went three wide past a slower car.

With two to go, Torres got along side Gaither, but again had an issue and fell back giving up spots to Rachui and Reyes. Gaither(San Antonio), in his SoTex Motorsports, Hercules Foundation Repair & Remodeling, Spreen Race Engines, Club 20, Swenson Racing Shocks, Donoghe Claim Services, Rangels Bail Bonds, Spreen Race Engines, Outlaw Chassis got some breathing room as he took the checkers.

“That was a great race,” commented Gaither. “It was one of those deals in the pits where the set up was going be right, or terribly wrong. I fought the car all night. It was slick on the top side and the bottom started coming in, but there were still a couple wets spots. You could race on entry, I just went back to my asphalt roots and held the bottom.”

“Allen(Torres) and I talked about it in tech. There was a real slick spot going into turn 3 and I think he shoved the nose more than he wanted. I inherited the lead at that point and told myself to just maintain. I went to the bottom tried to stay smooth down there. Once I felt pressure I drove it a little harder. I came out on top.”

“I knew I had good car coming out, so I’d drive in easier and Allen showed the nose. I’d never mat it off the corner and he’d get to me but I could pull away. I gave him the bottom going in the last few laps. I was kind of nervous if he’d lift or get into my door. He had a good run once but got an infield tire. Good hard racing. We talked about it and the heat race. It was a fast track, I was barely lifting(in the heat race). I didn’t think he could drive it deeper than me.”

“I’ve raced with Nathan Rachui down in Corpus when we did some traveling. He’s a good, hard racer. He gave me the top on one restart and I made it work. He gave me the bottom the next, I made that work. He’s tough to race against and a competitor just like me.”

All in Design Factory Stocks

In the Beginner Factory Stock feature it was Ricky Long taking the point early with Collin Alexander, Makayla Trimble, Johnny Johnson and Robert Fox in pursuit. Long and Alexander were door to door trading some paint on lap 3. Coming to halfway the top four remained the same after Fox pulled off.

The top three were separated by only about a car length when Long slipped allowing Alexander and Trimble to get past. Long fought back to get second from Trimble, At the finish it was the pavement Modified driver Alexander(New Braunfels) in the SoTex Motorsports, Hercules Foundation Repair & Remodeling, Spreen Race Engines, Outlaw Chassis snagging his first ever dirt track win.

“First win here on dirt,” exclaimed Alexander. “I honestly just got here from the lake at about 5pm. I didn’t get to make the heat race, just got out in the feature and took it home. I ran a pavement modified last year and we’re looking to do more this year too. I like running both, owning cars and driving. A bit of everything.”

“A win’s, a win. Hopefully we’ll get a little more practice and move up into the main class of Factory Stocks. I just get in the car and try to do my best, honestly. Whether it’s got a good set up or bad, I just adapt to the set up on the car and try to figure it out.”

Burris By a Bumper

Burris sr. was able to get past Tracy for fourth. After looking high on Hernandez, Burris jr. tried the low side getting along side on the back stretch. At halfway the lead duo were still battling door to door for the lead with Sitterle, Burris sr. and Tracy the top five. Hernandez then resecured the top spot.

As the lead fight waned, Burris sr. took third from Sitterle with two to go. Burris jr. had one last charge in him and made his run with the white flag waving. Getting a good run down the back stretch, Burris jr. dove it low into turn 3 getting along side. It was a drag race to the line with Burris jr.(Marion) in the Lonestar Chassis & Welding, San Antonio Karting Complex, 2000 Acura Integra, getting the win over Hernandez by a fender length.

“Levi and I had a good race,” exclaimed Burris jr. “I finally got him on the white flag after I jumped a tire. I just didn’t let off on the last lap and caught that tire. I was trying everything and couldn’t get by him. Pretty much just sent it on the last lap.”

New in the Forum